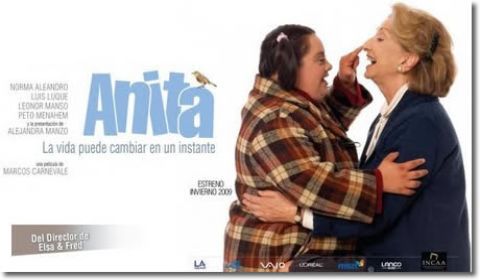 Each DFS member may bring one complimentary guest.

Anita, a young woman with Down syndrome, lives with her devoted mother (the “Meryl Streep” of Argentina, Norma Aleandr) above the shop her late father started in a commercial district of Buenos Aires.  Into their sweetly sedate domestic life the outside world intrudes with unexpected fury.  But as Anita wanders the city lost, she finds compassion in unlikely quarters through the simple force of her ingenuous personality and open heart.

Wrenching, lovely, suffused with life, Anita is a profoundly hopeful study of human innocence, compassion and resilience in a fragile, troubled world.  “Anita” has been called “truly remarkable”   exhibiting a “profound sensibility”, demonstrating the resilience of the human spirit and the power of love.”  … San Francisco Jewish Film Festival