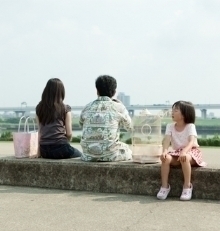 Mikio Kobayashi lives quietly with his wife, daughter, and divorced sister in downtown Tokyo, where xenophobic neighbors insist on them participating in community meetings, and the most exciting thing to happen is the disappearance of a pet parrot.  But one day Kagawa appears, claiming to be the son of a financier who once helped Kobayashi’s company.  In return for his family’s past help, Kagawa requests to move in, and  Kobayashi’s quiet lifestyle is quickly forgotten when Kagawa invites his Brazilian (or is she Bosnian?) wife and a myriad of eclectic and foreign visitors to join him in the cramped apartment.

The Kobayashis are comically tossed about in confusion as Kagawa and his associates run amuck in their home.  Kagawa, with the help of his visitors, manages to reveal old secrets and stir up the monotony of Mikio’s former life with affairs, blackmail, and rampant youthful partying.

“A marvelous tension between a prim comedy of manners and unbridled slapstick.” – Ronnie Scheib, Variety