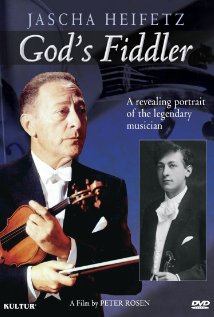 Not since Paganini had there been such a magician on the violin.  Filmed in ; ; and in Heifetz’s own rebuilt studio in , GOD’S FIDDLER: JASCHA HEIFETZ, spans a musical history of the 20th century as seen through archival films photographed by Heifetz himself.  The paradox of how a mortal man lives with immortal gifts – gifts he must honor, but which extract a life-long price.

“Rosen spices up the proceedings with bits and pieces on Heifetz performing in front of Helen Keller, his ownership of the first electric car, his patriotism expressed in shows for overseas American troops, and vignettes of him as a teacher who was feared by most of his students.”  Spirituality & Practice [Frederic and Mary Ann Brussat]