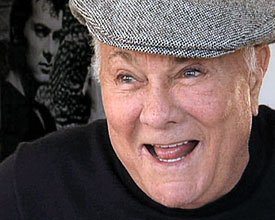 A true rags-to-riches story!  This fitting tribute to one of the 20th century’s most iconic leading men spans from Curtis’s tough and humble beginnings in the Bronx to his most striking movie roles.  Through intimate interviews with Tony, as well as close friends, family and co-stars, viewers learn more about the star who shaped trends that both James Dean and Elvis imitated.

Exclusive footage and film clips give deeper meaning and clarity by the most honest and intimate interview the actor may have ever given.

“Documentaries about people in the entertainment industry rely heavily on whether the person at hand is interesting.  Luckily, Tony Curtis’ life story is quite fascinating.” Shalom Life, Ilan Mester