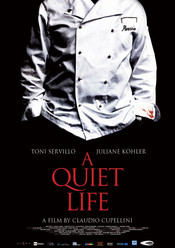 Chef Rosario seems to live his life as a restaurant owner with a new wife and a little son in Germany but is suddenly haunted by his mafia past when his grown up Italian son is looking for shelter after a killing.  In German & Italian.

“Claudio Cupellini’s,  A Quiet Life is a masterful turning of the screw, a quietly evolving tale of vengeful ghosts of the past returning to claim a darkened soul from his temporary state of grace.” 20/20 Filmsight