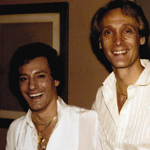 An Ordinary Couple is a romantic and uplifting documentary following two extraordinary men, Orin Kennedy and Bernardo Puccio, on an unexpected journey from their funeral to their wedding.  Yes, in that order.

Their story is not distinctive in that it involves two men.  Rather, it is extraordinary because their relationship has flourished for 33 years, that both men escaped the AIDS epidemic, and that they continue to make their relationship normal in the face of discrimination, opposition and misunderstanding.  Intertwining themes of love, marriage, and politics, the film delivers humor, political commentary, the occasional touch of drama, and a deeply personal look at Kennedy and Puccio’s dedication to one another.