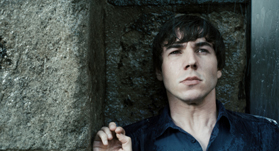 
"Young Sasha Petrovic, studious and musically talented, is the beloved child of his Montenegro-born parents, who run a pub adjacent to their home in Cologne.  But he’s got a secret crush that’s about to throw his life into chaos.  With a clash of cultures and generations, Sasha is a refreshing take on the coming-out story, bravely addressing homophobia in a Balkan immigrant family.

Sasha is beginning to take those first few momentous steps out of the closet, but he’s got a lot of other stuff on his hands.  He’s nervous about an upcoming audition for a prestigious music school, he’s beset by a powerful crush on his piano teacher, Mr. Weber, and he’s taunted by his younger, more athletic brother Boki.


Sasha first comes out to his best friend Jiao, only to find her confused and upset.  It turns out she’s been hiding strong feelings of her own — for Sasha.  And then there are his parents, loving and somewhat permissive but still retaining cultural prejudices against homosexuality.  Pulled in all directions, Sasha’s relationship with his family comes to a violent head, only to be saved by an unexpected ally.

Writer/director Dennis Todorovi juggles all these romantic conflicts and familial dramas with an effortless touch.  He also presents a multi-ethnic Cologne with subtlety and nuance.  The film boasts a winning cast of leading and supporting actors, who negotiate easily between comedy and drama.  There is still vitality in coming-out stories, as Sasha shows us with soul." — ROD ARMSTRONG – framelinc