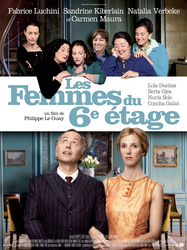 Conservative and tyrannical Jean-Louis Joubert, played by Fabrice Luchini (“Potiche,” “My Father’s Guests”, “Molière”), is unhappily married to Suzanne, a neurotic Parisian socialite (Sandrine Kiberlain, “Mademoiselle Chambon”, “A Self-Made Hero,” “For Sale”).  Enter a group of buoyant Spanish maids, refugees of the Franco regime, who live in the servants’ quarters on the sixth floor of their building.  Among them are Concepción (Carmen Maura, “Volver,” “Women on the Verge of a Nervous Breakdown”) and her niece María (Natalia Verbeke, “The Method,” “Dot the I”).  When the family maid suddenly walks out, Suzanne and Jean-Louis hire

María and life is about to change.  Presented out of competition at the 2011 Berlinale, SERVICE ENTRANCE is already a critical and commercial success in France. …. synopsis courtesy  of ColCoa Festival, Los Angeles,  April 2011