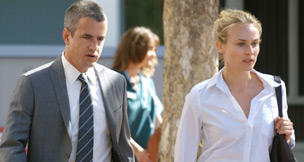 INHALE is a riveting thriller about a father ready to go to any lengths to save the life of his daughter.  Dermot Mulroney (MY BEST FRIEND'S WEDDING) stars as Paul Stanton, a District Attorney who, with the help of his wife (Diane Kruger, INGLORIOUS BASTERDS), is trying desperately to find a transplant donor for his young daughter, Chloe.  Diagnosed with a rare degenerative condition, Chloe is in mortal need of a lung transplant, and when her health worsens Paul becomes determined to do anything to save her.  Also starring Sam Shepard, Vincent Perez, Rosanna Arquette and Jordi Molla.

“INHALE is nonstop. The film's running time in a mere eighty three minutes, leaving no down time in a plot filled with so many twists and turns that you cannot predict where you will end up. The editing is tight and fast paced, leaving you guessing what might be around each turn up until the very end.”  Tonight at the Movies