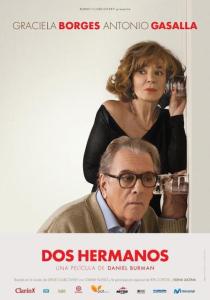 They are both alone. They need each other but, at the same time, they despise each other.  Siblings Marcos and Susana are unable to heal the old wounds festering within them.  Marcos's need to start living again surfaces when his sister forces him to leave Buenos Aires for Uruguay.

“Dos Hermanos” came out strong in its world premiere in Argentina earlier this year, posting the hottest per-screen gross.  Based on the novel by Diego Dubcovsky, “Laura’s Villa.”

“Funny and very perceptive about two siblings both devoted to and limited by each other, “Brother and Sister” conveys warmth and sadness in terrifically subtle ways. Great performances make this a moving and surprising pleasure.”  Chicago International Film Festival