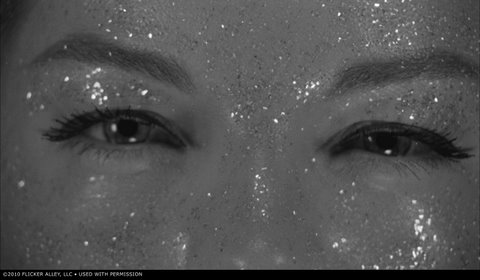 In 1964, famed director Henri-Georges Clouzo,  (Wages of Fear, Diabolique, etc.),  began work on his most ambitious film to date, L’ENEFER (INFERNO).  It was a dark psychological study of the mental disintegration of hotel owner Marcel (Serge Reggiani), consumed by jealousy at the supposed infidelity of his stunning young wife, played by Romy Schneider in her prime.  After months of preparation in Paris, Clouzot took his cast and crew to the south of France, where everything went horribly wrong.

For nearly half a century INFERNO was the stuff of legend among film buffs who heard tantalizing stories about the “lost” film by one the great directors, but in 2005 film archivist Serge Bromberg unearthed 185 cans containing not only the footage from the ill fated shoot, but the equally amazing pre-production tests.  It is a kaleidoscope of colors, angles, tracking shots etc. unlike anything anyone had tried before or since.  HENRI-GEORGES CLOUZOT’S INFERNO gives audiences the first glimpse of some of the most extraordinary film ever shot and brings together surviving members of the cast and crew including director Costa-Gavras, a production assistant and famed cinematographer William Lubtchansky, an assistant cameraman, to recount the equally amazing story behind them.  The madness and obsession portrayed on the screen mirrored Clouzot’s own behavior on the set.

“A revelation…a remarkable journey into the psyche of an obsessed director…. There's no way of knowing if INFERNO would have been a masterpiece or a fiasco, but Bromberg has crafted something of a film buff's dream from Clouzot's nightmare.” – Stephen Farber, Hollywood Reporter

“The riveting story of one of cinema history's great ‘lost’ movies… A must-see.” – The Guardian