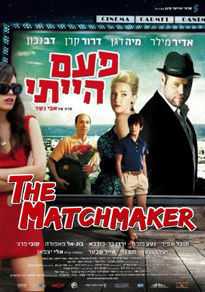 Director Avi Nesher re-creates Israel during the summer of 1968 in this poignant, engrossing coming-of-age story. Teenager Arik Burstein is the son of a survivor who never talks about his past. When he gets a summer job working as a kind of detective for matchmaker Yankele Bride, he finds himself in the strange and fascinating world of Haifa’s seedier downtown area. Dwarves running a movie theatre showing only love stories, the glamorous and tragic Clara (Maya Dagan) and a carnival of clients for whom Yankele provides “what they need, not what they want” all become intensely involved in each other’s lives, the secrets of their pasts and their dreams of brighter futures. Nominated for 7 Israeli Academy Awards including Best Picture.

“The Matchmaker” seems singular among Israeli features in the way it juxtaposes guilt with hope, national birth pains with youthful hubris, and utilizes an underside of Israeli life not usually exposed to public view. Variety.com