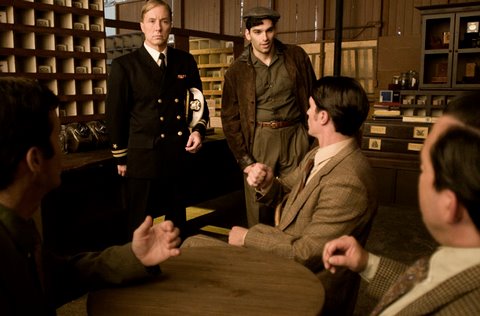 Each DFS member may bring one complimentary guest

Washington, DC, 1935: At the height of the Great Depression, Eddie Doyle (Donal Thoms-Cappello), an ace safecracker, is just doing what he does best: stealing.  Now facing prison, Eddie finds he has another option.  Enter Lt. F. Ellis Coburn (Lee Perkins), a cool-as-ice Navy man with a problem only Eddie can solve: the Japanese military has changed its encryption codes, with potentially devastating results for the U.S.

A prominent Japanese diplomat holds the key to his country's secrets in the form of a mysterious machine.  As Eddie and Coburn work together to pull off the heist of a lifetime, they find more to the job than they bargained for as things get very personal.  Full of crackling dialogue, eye-catching visuals and unpredictable twists, co-directors Stephanie Argy's and Alec Boehm's The Red Machine is a charming throwback to the great espionage capers of the 1930s.

“Here’s a film with an elegant simplicity.  Not a shot doesn’t do its work.  It may remind you of a ’40s B crime movie, and I mean that as a compliment.”  – RogerEbert.com

showing with GANDHI AT THE BAT  (11 minutes)

For decades, historians have searched for evidence of Mahatma Gandhi’s top-secret trip to the United States in 1933.  At President Roosevelt’s request, all contemporary accounts were suppressed and no records have ever been found – until film historians unearthed this never-before-seen newsreel footage of Gandhi’s legendary (and totally fictional) visit to Yankee Stadium.

Based on a short story by Chet Williamson that originally appeared in the New Yorker in 1983, Gandhi at the Bat is a mock newsreel account of Mohandas K. Gandhi's pinch-hit for the New York Yankees.  The 11-minute movie includes over 75 effects shots, done by the directors themselves, which transform the actual shooting location (a minor league ballpark in Bakersfield, California) into a faithful recreation of Yankee Stadium as it was over seventy years ago.