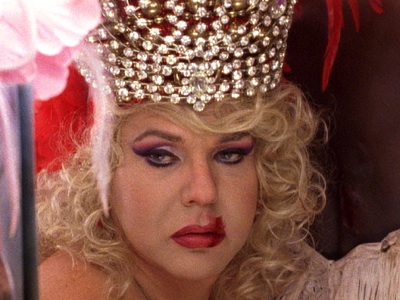 João Pedro Rodrigues’ latest, a hit at both Cannes and the New York Film Festival, is a mystical melodrama that tells the tragicomic tale of a transsexual who is stuck between her junkie boyfriend’s desire for her to fully assume a female identity and her own Catholic convictions that have kept her from surgery.  Tonia, a veteran transsexual in Lisbon’s drag

shows, watches the world around her crumble. The competition from younger artists threatens her star status.  And her son, whom she abandoned when he was a child, now a deserter, comes looking for her.

“… a deep and fabulously sad fable, as well as an example of lyrical, playful, unpredictable filmmaking from this Portuguese festival star.“  The Village Voice