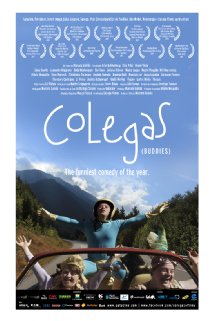 COLEGAS (BUDDIES) is a road movie that shows the simple things in life in a poetic light through the eyes of three young people with Down Syndrome, who love movies and work at the video library of the institution where they have always lived.  Inspired by the movie “Thelma & Louise”, they decide to run away using the gardener’s old car to have a freedom experience.

They travel to uncommon places in search for three simple wishes: Stalone wants to see the sea, Aninha looks for a husband and Marcio needs to fly.  During this search, they embark on several adventures as if life was just a children’s play. … Summary written by Aleksandra Zakartchouk.

Trailer (in Portuguese, no Subtitles):  http://www.youtube.com/watch?v=FpqjVpX2IfQ