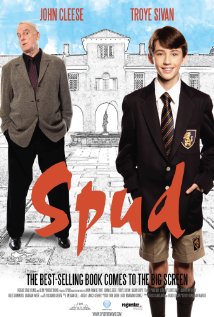 It’s South Africa 1990.  Two major events are about to happen: The release of Nelson Mandela and, more importantly, it’s Spud Milton’s first year at an elite boys only private boarding school.  Spud has his hands full trying to adapt to his new home.  Along the way Spud takes his first tentative steps along the path to manhood.  (The path it seems could be a rather long road).  He is cursed with parents from well beyond the lunatic fringe and a senile granny.  Armed with only his wits and his diary, Spud takes us from illegal night swimming to the red-hot furnace of the cricket pitch, from ghostbusting to a catastrophic family vacation.

He also invites us into the mind of a boy struggling to come to terms with a strange new world, a boy whose eyes are being opened to love, friendship and complete insanity.  Based on the best-selling book series by John van de Ruit.  ….. Summary written by Ross Garland

“Troye Sivan makes a vulnerable Spud, but he finds his voice and completes his hero’s journey with a flourish and a bitter sweet final note.”  Urban Cinefile