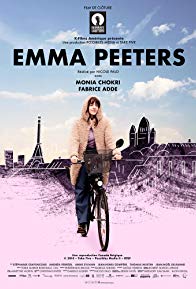 Emma Peeters will soon be 35 and has yet to accomplish something.  After years of hardship in Paris in trying to become an actress, an idea strikes her fancy: bringing her days to an end in a week’s time, on her birthday.  In the process Emma meets Alex Bodart, a fanciful funeral home employee who will help her in her reckless endeavor.  By dint of hard work to hide their respective feelings, it seems they may succeed in bringing about Emma’s final objective…

“Palo’s film has a unique and accessible storyline and engaging characters; as it makes its way onto the festival circuit, it would be a great pick up for distributors or streaming services alike.” … Ten Seconds From Now

“Emma Peeters certainly isn’t the first comedy to broach the sensitive subject of suicide. Nonetheless, it manages to find its own distinctive, simultaneously quirky and non-patronising voice in this particular corner of the great wide cinematic universe.” … Cinema’s Fringes