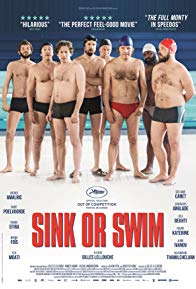 With buoyant energy, Gilles Lellouche choreographs and directs a stellar ensemble in pursuit of grace and discarded dreams—that is, a group of varyingly coordinated middle-aged men who find an outlet in synchronized swimming. Bertrand (Mathieu Amalric, soulful yet understated) is the newbie to the group, having signed up on a whim to take his mind off of his unemployment and depression. As he gets to know his fellow swimmers, played by Guillaume Canet, Benoît Poelvoorde, Jean-Hugues Anglade, and Philippe Katerine, he uncovers shared frustrations and disappointments, but also hope in a hobby that’s less about skill than teamwork. After a year of awkward and charmingly comedic practice sessions, Bertrand’s proposal that his motley crew train for the world championships fuels their conviction to prove that time has not passed them by. Nominated for 13 César Awards including Best Film, Director, Supporting Actor, Supporting Actress, Screenplay, and Cinematography.  Philippe Katerine won 2019 César for best supporting actor.  Film also nominated for 3 Cristal Awards. … Rendezvous with French Cinema New York

Language:  in French and Sinhalese with English subtitles