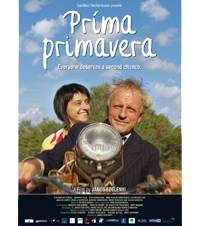 Gábor, a middle-aged, simple-minded man, finds his life is suddenly thrown into chaos when his caregiver mother is shot in a bizarre bank robbery that he witnesses.  He forms an unlikely alliance with Joli, a no-nonsense Ukrainian girl from the underworld and they embark on a journey of escape to a sanctuary he remembers from his childhood.