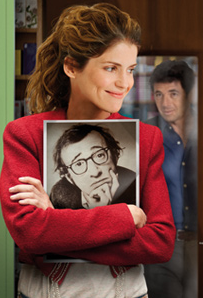 Alice is an offbeat pharmacist surrounded by a nice but dysfunctional family.  She’s still single to the great consternation of her parents.  She actually met the perfect man 20 years ago… but he married her sister!  Since then, no one has lived up to her expectations.  She takes refuge in Woody Allen movies.  In her day dreams, she has long talks with Allen, asking him about everything from love to work.  According to Alice, all answers can be found in Woody Allen movies.When she meets Vincent, the perfect guy, her life seems to change for the best.  But she also meets Victor, who’s not the perfect guy.  He’s never even seen a Woody Allen movie!  So why does he turn her life upside down?It’s time for Alice to take action.  As Woody Allen told her: ”You have to be your own person and make your own moral choice even when they do require real courage.  Otherwise you’re like a robot, a lizard.“

“The performances are all solid with that extra magic coming from Taglioni and Bruel.  There’s a lively and lovely escalation to the finish line and it is not until the very end that the film’s emotional punch is delivered.  Needless to say, Paris is always at her best and there’s a simple pleasure in taking this Paris Manhattan journey.”   Urban Cinefile