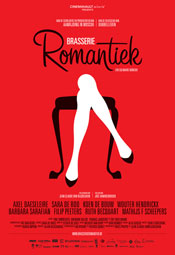 Forty-something Pascaline runs a brasserie and her stylish dining room is fully booked for Valentine’s Day.  She thinks she’s prepared everything. But how could she expect that an old flame from 20 years ago would suddenly reappear.   Her other diners must also cope with the unexpected –  50 year-old, bored housewife, Rose, Mia, approaching 30 and thinking of suicide, and shy clerk, Walter.

The lust-inducing menu in Brasserie Romantique, makes the audience salivate, is comprised so:

First Course: Oyster Gratin with spinach in a Champagne sauce