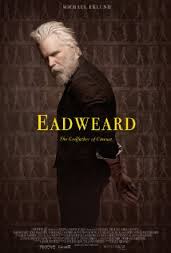 EADWEARD is the perfect movie to play both at a film festival and an art museum.

It recounts the endeavors of the real-life Eadweard Muybridge, whose 19th-century photographic methods would serve as a template for what became movies. It is also a visually captivating film, beautifully shot by cinematographer Tony Mirza.

Muybridge, played by Michael Eklund, is an obsessive observer of motion: horses galloping, humans jumping. In the 1880s, he took more than 100,000 photographs as part of a study for the University of Pennsylvania. His retinue included his much younger wife, Flora (Sara Canning), officious interns and nude models who would demonstrate disrobing, broom-sweeping, bucket-pouring and wrestling before a row of 24 cameras.

Pornography? “No,” says Muybridge. “This is science. This is Life.”

Muybridge was a mad genius of sorts. With his laser focus and dogged determination, he could be a cousin of Daniel Plainview in “There Will be Blood.” He also takes a turn down a dark road when he suspects his wife of cheating on him.

First-time feature director Kyle Rideout, who co-wrote the screenplay with Josh Epstein, has a marvelous touch when it comes to embracing Muybridge’s photographic passions. Lenses are aligned, awaiting the perfect tint of natural light. On cue, the subjects swirl, twirl, skip and dance. They are becoming immortalized in the synchronized steps of the first ‘motion pictures’,”  ….. written by Cleveland Museum of Art

“Kyle Rideout’s Eadweard is a painstakingly beautiful portrait of Eadweard Muybridge (Michael Eklund); an early pioneer of photography and inadvertent grandfather of cinema.  Fittingly, Tony Mirza’s cinematography is exquisite and precise from the first frame to the last, but the film flies the flag for impeccable craft on all fronts: immaculately styled, inventively staged and carefully edited … “Stage Buddy