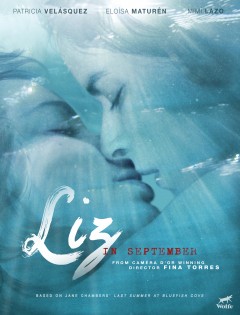 Based on the classic lesbian play, LAST SUMMER AT BLUEFISH COVE, the drama, LIZ IN SEPTEMBER stars Latina lesbian supermodel Patricia Velasquez and is brought to the screen by esteemed Venezuelan director Fina Torres (WOMAN ON TOP).

Every year, Liz (Velasquez), a hardcore party girl and womanizer, celebrates her birthday with her friends at a Caribbean beach retreat. This year is different. When a young woman outsider arrives, Liz’s friends dare her to seduce her. But the ingenue is deeply wounded by the recent death of her young son, and nothing turns out as expected.