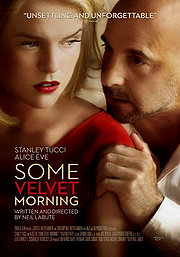 Stanley Tucci stars as a man who surprises his former mistress (Alice Eve), claiming to have left his wife. Before too long, a dark history between the two has come into focus.

“LaBute hasn’t made something this unforgettable in a long time.” – The Playlist

“Full of intelligent and witty twists and turns.” – Screen International

“The trouble with “Some Velvet Morning” is that it’s impossible to discuss why it’s so powerful without giving away much about the very revelations and plot twists that help make it so.”  www.rogerebert.com